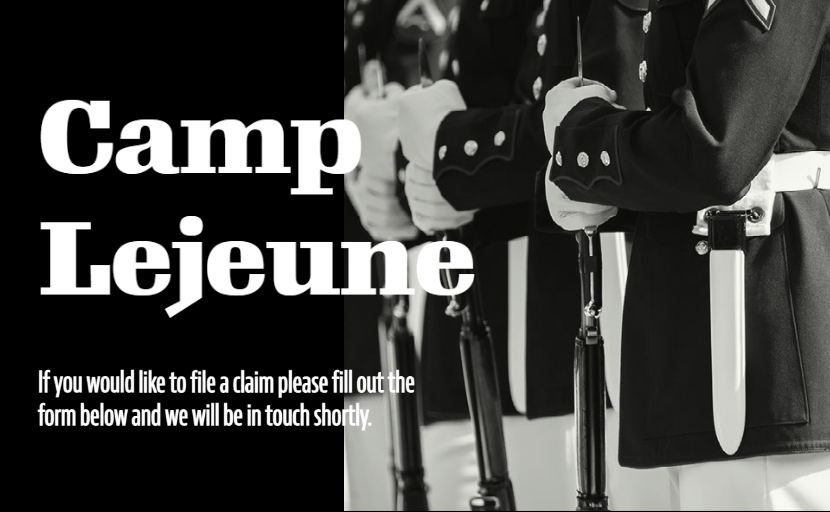 We are Camp Lejeune claims attorneys located in Laurel,  Mississippi. As you may have seen on television or social media, persons, including veterans, spouses, children, and civilians, who served, lived, or worked at Camp Lejeune between August 1, 1953, and December 31, 1987, were exposed to toxic chemicals which contaminated the water. Exposures to these chemicals have been linked to numerous diseases including, but not limited to:

If you were exposed to the water at Camp Lejeune for 30 days or more, between the above dates, you may be entitled to compensation pursuant to the Camp Lejeune Justice Act of 2022. For further information regarding a claim arising from exposures at Camp Lejeune, please call us at 601-699-1833 to give one of our staff the information we need to evaluate whether you have a claim or visit our website at (www.hortmanharlow.com/camplejeune) to fill out our online intake questionnaire.

Please note that the Camp Lejeune Justice Act of 2022 requires that all claims must first be filed with the Office of the Judge Advocate General Tort Claims Unit in Norfolk, Va. If a claim is denied, it must then be filed in The United States District Court for the Eastern District of North Carolina. We have therefore associated Chalmers & Adams. PLLC, Raliegh, NC, and Chuck Gabriel CDGabriel@ChalmersAdams.com, a member of the firm to assist us in these cases. One more thing to be aware of is that all claims must be filed within two years from August 10, 2022. During that time, we must gather all the medical records pertaining to the injuries you suffered from exposure to the water at Camp Lejeune as well as the military and other records that verify that you were exposed. So, if you want us to file a claim for you, please do not delay contacting us.

U.S. Marine Corps Base Camp Lejeune, North Carolina was established in 1942. In 1982, the Marine Corps discovered specific volatile organic compounds (VOCs) in the drinking water provided by two of the eight water treatment plants on base.

Water from the Tarawa Terrace water treatment plant was primarily contaminated by PCE (perchloroethylene or tetrachloroethylene). The source of the contamination was the waste disposal practices at ABC One-Hour Cleaners, an off-base dry-cleaning firm. The Agency for Toxic Substances and Disease Registry (ATSDR) used a data analysis and modeling approach to reconstruct historical contaminant concentrations. Using these approaches, ATSDR estimated that PCE concentrations exceeded the current EPA maximum contaminant level of 5 ppb in drinking water from the Tarawa Terrace water treatment plant for 346 months during November 1957-February 1987. The most contaminated wells were shut down in February 1985.

Fill out the form below to contact one of our attorneys.